This piyut is a classic that can be sung to various parts of the Tefila, such as El Adon, Rau Banim and Shavat Aniyim. I recorded the entire song and then added Shavat Aniyim.
The official maqam is bayat but it is also associated with irak.
at May 31, 2018 No comments:

Here are three tunes to the song Nirdi Natan Reho. Number 3 is similar to Yom Ze sung on Pesah. Number 2 I also sing to Lecha dodi which I like to do throughout the year. Number 1 I end off with the kedusha.
Nirdi Natan Reho is lichvod Hatorah!
at May 17, 2018 No comments:

In honour of Shavuot, here is the song that speaks of the honour and glory of the Tora which we celebrate during this holiday.
I like to sing this song for kadish on the first night of the holiday and I often use it for bar mitzvas.
at May 15, 2018 No comments:

In honour of Yom Yerushalayim, where we celebrate the city that we will never forget, no matter where in the world we live in.
This set of songs is from the koudam  of makam Isbihane. It speaks of the glory of Jerusalem. Many insert the words of Yerushalayim shel Zahav in place of Sura Adoni Sura and it fits perfectly.
Enjoy

A beautiful piyut stemming from Yerushalmi-origin (song called "lish lish")  that is sure to get everyone excited and moving. The makam is Rast from one of the Yerushalmi makamim.
I continued to sing the stanza of Mezulzelet in a different tune. This melody can be applied to many different parts of Tefila, such as Kedusha, Hashkivenu, Va'ani Tefilati etc...
Enjoy!
at May 09, 2018 No comments:

Email ThisBlogThis!Share to TwitterShare to FacebookShare to Pinterest
Labels: piyut

Lag Ba'omer marks the end of the mourning period for the students of Rabbi Akiva. In addition it is also the Hilula or Rabbi Shimon bar Yohai. Songs about Rbi Shimon were composed throughout the generations by many tzadikim.
Here are 3 songs for your enjoyment.

This is the traditional song of Rabbi Shimon bar Yohai, sung in a traditional Moroccan melody.

This song was composed by Rabbi Yaakob Abuhatzeira in honour of Rbi Shimon. I adapted a Sahli tune to the words from the songs "Yadecha Tanheni" then switched the tune to "Mezulzelet"

Last we have this song composed by the Ben Ish Hai in honour of Rbi Shimon. I put the tune of Sha'ar Petah Dodi to the words.

May the merit of Rabbi Shimon bar Yohai protect all of Klal Yisrael, Amen.

This tune for El Adon comes from the famous Ashkenazi song "The little bird is calling" and has been adapted dozens of times to o... 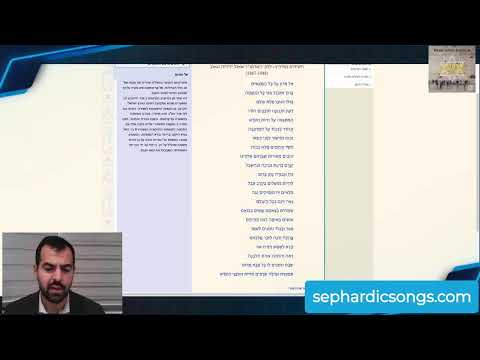